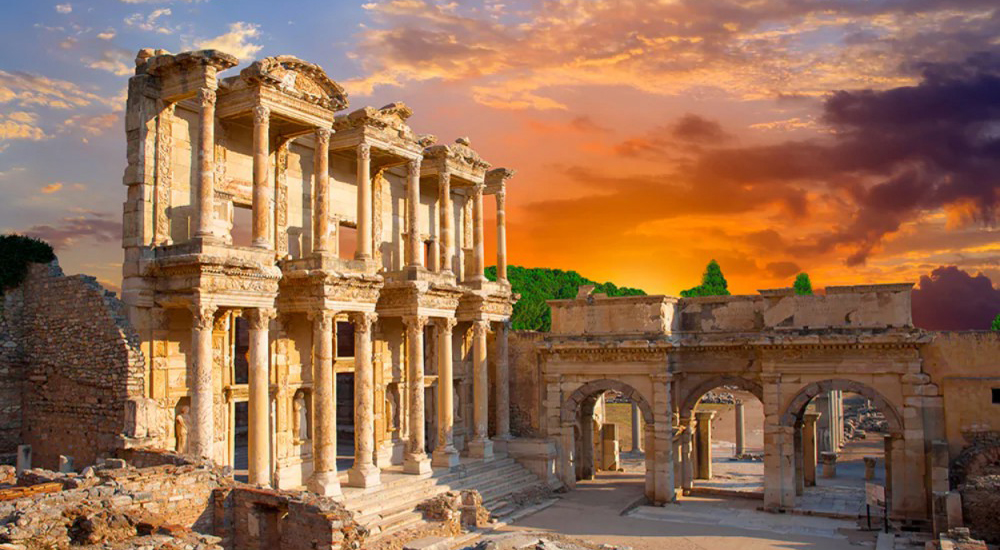 Ephesus
One of the oldest cities in Turkey, a World Heritage Site and one of the largest archaeological sites in the world, Ephesus was founded by the Greeks and is home to ruins and monuments that make it one of the most important centers of the last century.
Ephesus is still a very important symbol for Catholicism, first because Paulo de Tarso and João Evangelista preached in the city and second because it houses one of the seven churches mentioned in Revelation.
Because it is a very old city, it has undergone several restorations and has made it perfect for receiving tourists from all over the world. During the tour of Ephesus, it will be possible to observe the daily life of the population, such as the bathing places, gym, museums, theaters, houses, library, temples, churches, gates, houses, among other diverse attractions that will impress and fill the visitors' eyes.

Attractions
Temple of Artemis One of the 7 Wonders of the Ancient World, the Temple of Artemis was built in 550 BC by the Cretan architect Quersifrão and his son Metagenes, in honor of the Greek goddess of fertility.
Formerly the temple that was considered one of the largest in the world, possessed a monumental architecture, full of exuberant and valuable works of art and that was lost in 356 BC after a fire. Its reconstruction took 20 years, but in 262 BC it was again destroyed by the Cobbles and earthquakes that devastated the region during the years that followed.
Today, whoever visits the site will be able to glimpse a lonely column amidst all the history erased by the actions of time. Even in ruins, the monument remains one of the most beautiful and has one of the most impressive views.

House of the Virgin Mary One of the great attractions of Ephesus, is a small house located on a hill just 9 km from the city. It is believed that the place served as a residence for Virgin Mary, mother of Jesus.
According to the Bible, in his last days of life, Jesus asked St. John the Evangelist to take care of his mother. It was then that he took her to this hut in 42 AD, where she lived until her death.
Considered an important religious symbol, many tourists who go to the House of the Virgin Mary are thrilled by the environment that is totally special and surrounded by greenery. Around the house you can find a source of holy water, which many believe has miraculous properties.
Visiting is restricted to small groups of people, always in silence and without the presence of cameras or cell phones. This is because the place is considered sacred and follows the same rules as the churches.
The House of the Virgin Mary is visited by thousands of people of various ethnicities, including Muslims, throughout the year.

Hadrian's Temple In excellent condition, despite its construction standing since AD ​​138, the Hadrian's Temple was built by P. Quintílio as a way to honor Emperor Hadrian, one of the 5 best leaders of the Roman Empire.
When visiting the temple, you will be able to admire right at the entrance its large and imposing facade, consisting of four Corinthian columns that support the arch that bears an image of Tyche, the Goddess of Victory, very sinuous pillars and a pedestal with ancient scriptures.
Inside the temple, tourists will be welcomed by a statue of Medusa, which is located along with the acanthus plants and replicas of the friezes that refer to the gods: Apollo, Athena, Androkles and Herakles. Its reliefs and ornaments attract tourists' attention due to the wealth of architectural details and make Hadrian's Temple one of the main attractions of Ephesus.
Ephesus Museum One of the most precious and ancient places in Turkey, due to its rich history and its importance to the archeology of the region, the Ephesus Museum emerged in early 1929 and was used as a warehouse to store excavation artifacts collected around of the ruins.
In 1964, the south side of the museum was built and the artifacts began to be exposed and exhibited there, as time went by the place became smaller every day and in 1995 another section was introduced to the space.
The place that became known over time as the city created by Androclos, son of the king of Athens, was recently renovated and has some gift shops, in addition to its main highlights, the two statues of Artemis, in mosaics and frescoes and articles such as jewelry, cosmetic boxes, coins and other pieces of art important to history.
Celso's Library
The Celsus Library is one of the most important and visited tourist spots in Ephesus, the majestic and charming building, it was built in the early 2nd century AD in honor of the governor general of the Province of Asia of the Roman Empire, Tiberius Lulius Celsus Polemaeanus.
The site that housed approximately 12 thousand parchments and was considered the third most important library in the ancient world, was destroyed by the Goths, except for its facade made in white marble, which was rebuilt between the years