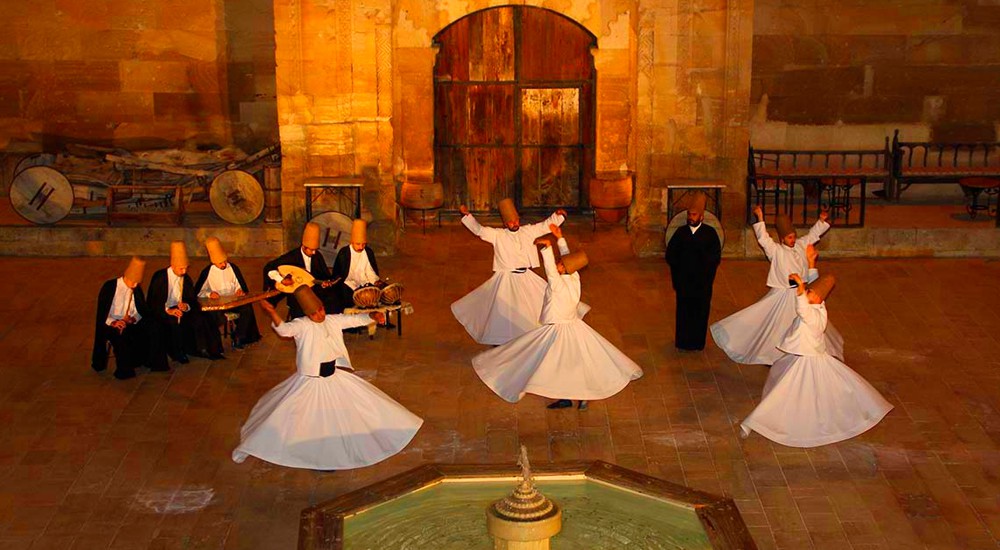 We offer the most beautiful activities for our guests in our caravanserai. Public activities are listed below.

Whirling Dervishes Ceremony
The first and only Whirling Dervishes Ceremony in the Cappadocia region is held in our caravanserai. The ambience of a historic building and the natural lighting of this environment will work deep into your soul and you will have an unforgettable time. We strongly recommend that you watch our daily ceremony and see our caravanserai that defies time.

Whirling Dervishes Ceremony at Historical Caravanserai
Semâ is the inspiration of Mevlanâ Celâleddin-i Rumi (1207 - 1273) as well as part of Turkish custom, history, beliefs and culture... It symbolizes in seven parts the different meanings of a mystic cycle to perfection (Ascension - Mirac).

Contemporary science definitely confirms that the fundamental condition of our existence is to revolve. There is no object, being which does not revolve and the shared similarity among beings is the revolution of the electrons and protons in the atoms, which constitute the structure of the smallest particle to the stars far in the sky. As a consequence of this similarity, everything revolves and man carries on his life, His existence means of the revolution in the atoms, structural elements in his body, the circulation of his blood, and his resurrection. However, all of these are natural, unconscious revolutions. But human beings possessors of a mind and intelligence which distinguish them from, and make them superior to other being. Thus the whirling dervish or Semâzen causes the mind to participate in the shared similarity and revolution of all other beings...

The Semâ ceremony represents end entire mystical journey, a spiritual ascent through love, in which the dervish deserts his ego, finds the truth and arrives as "The Perfect". Then he returns from this spiritual journey as a man who has reached maturity and a greater perfection, so as to love and to be of service to the whole creation, to all creatures without discriminating in regard to belief, class, or race.

The dervish with his head-dress (his ego's tombstone), his white skirt (his ego's shroud) is spiritually born to the truth, by removing his black cloak, he journeys and advances to spiritual maturity through the stages of the Semâ. At the onset and each stage of the Semâ holding his arms crosswise he represents number one, and testifies to God's unity.

While whirling his arms are open, his right hand directed to the sky ready to receive God's beneficence, gazing his left hand turned toward the earth, he turns from right to left, pivoting around the heart. This is his way of conveying God's spiritual gift to the people upon whom God looks with a Divine watchfulness. Revolving around the heart, from right to left, he embraces all of humankind, all the creation with affection and love.

The Semâ consist of several parts, with different meanings...
A- It stars with a eulogy "Nat-i Şerif" to the Prophet, who represents love and to all Prophets before him. To pause the is to praise God, who created all of them.

B- This eulogy is followed by a drum sound symbolising the Divine order of the Creator... "Kun=Be!"

C- Then follows an instrumental music improvisation “Taksim” with a reed “Ney”. It represents the first breath which gives life to everything: The Divine Breath.

D- The fourth part is the dervishes greeting to each other and their thrice repeated circular walk "Devri Veledi" accompanied by music called "Peshrev". This symbolize the salutation of soul to soul concealed by shapes and bodies.

E- The fifth part is the Semâ (whirling) which consists of four salutes or "Selam” s. At the end of each as at the onset, the dervish testifies to God's unity.

1- The first salute is man's birth to truth by feeling and mind. It represent his complete conception of the existence of God as Creator and his own State as creature.

2- The second salute expresses the rapture or man witnessing the splendour of creation, before God's greatness and omnipotence.

3- The third salute is the dissolution into love and thereby the sacrifice of mind to love. It is a complete submission, it is the annihilation of self in the loved One, it is unity. This state of ecstasy is the highest grade, defined as "Fenafillah" in Islâm. However, the highest rank in Islâm is the rank reached by the Prophet: He is called God's servant foremost and subsequently his messenger. The aim of Semâ is not unbroken ecstasy and loss of conscious thought, but realization.

4- The fourth salute: Just as the Prophet ascends the "Throne and then returns to his task on earth, the whirling dervish, following the termination of his spiritual journey and his ascent, returns to his task, to his state of subservience. (He is a servant of God, of His prophets and all creation... Sura Bakara 2, verse 285). At the end of this salute, he demonstrate this again by his appearance, arms placed crosswise representing the of God, consciously and his feelings.

F- The sixth part of the Semâ is a reading of the Quran, especially of the verse from Sura Bakara 2, verse 115. (Unto God belong the East and the West, and wherever you turn, there is God's countenance. He is All-Embracing. All-Knowing).

G- The Semâ ceremony ends with a prayer for the peace of the souls of all Prophets and all believers...After the completion of "Semâ" ritual all the dervishes return silently to their cells for meditation. 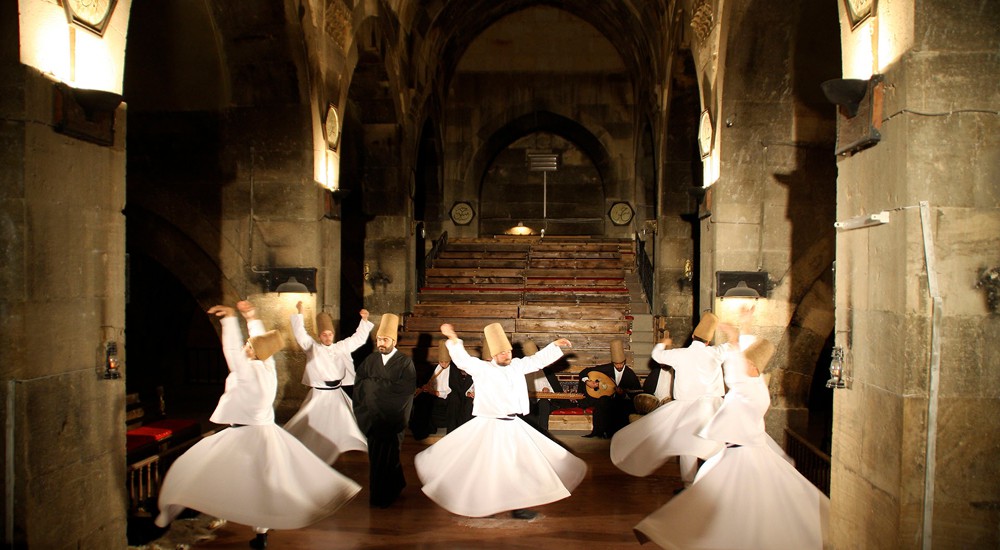 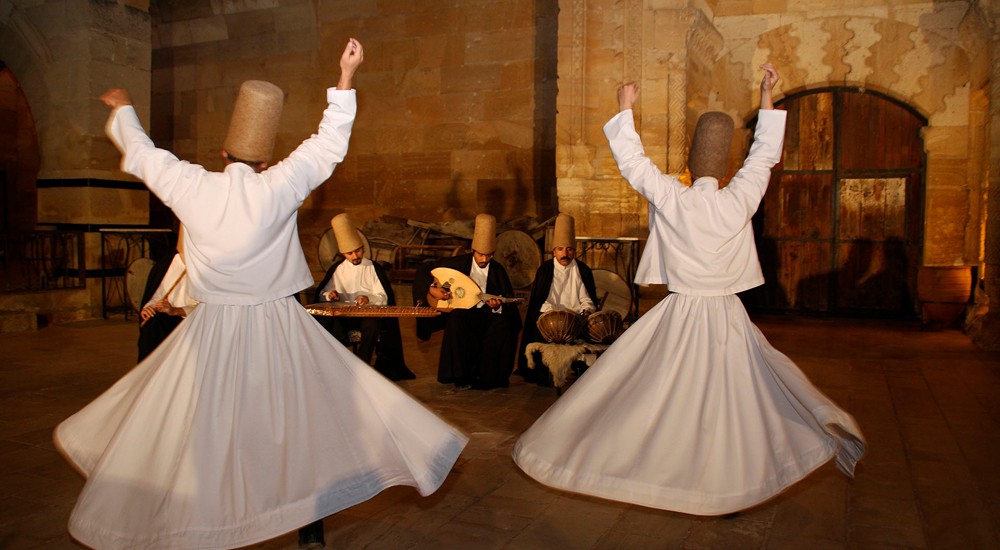 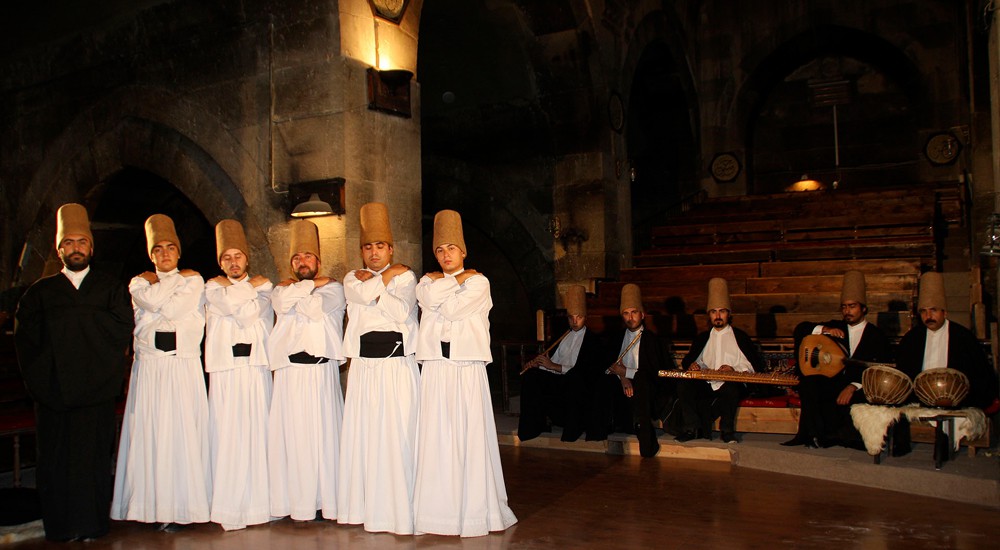 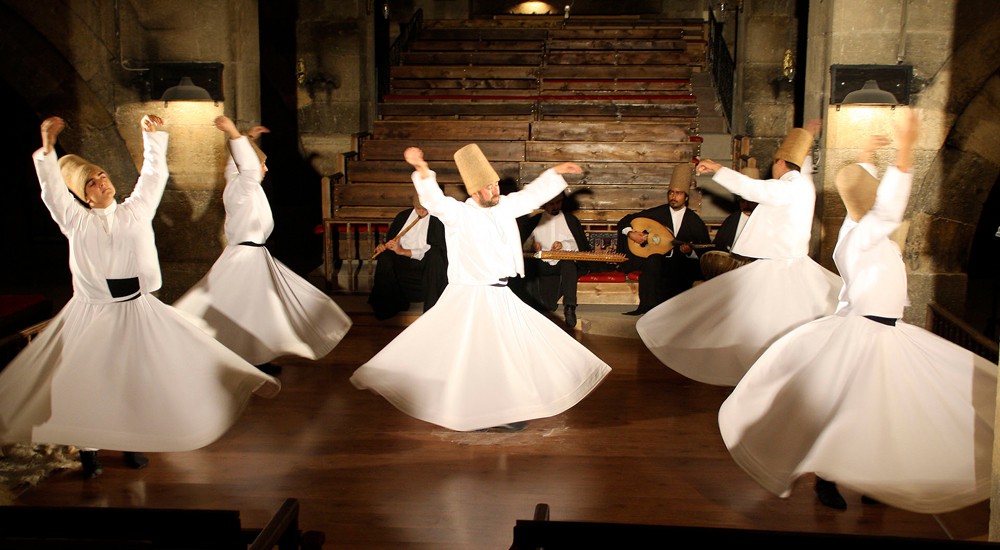 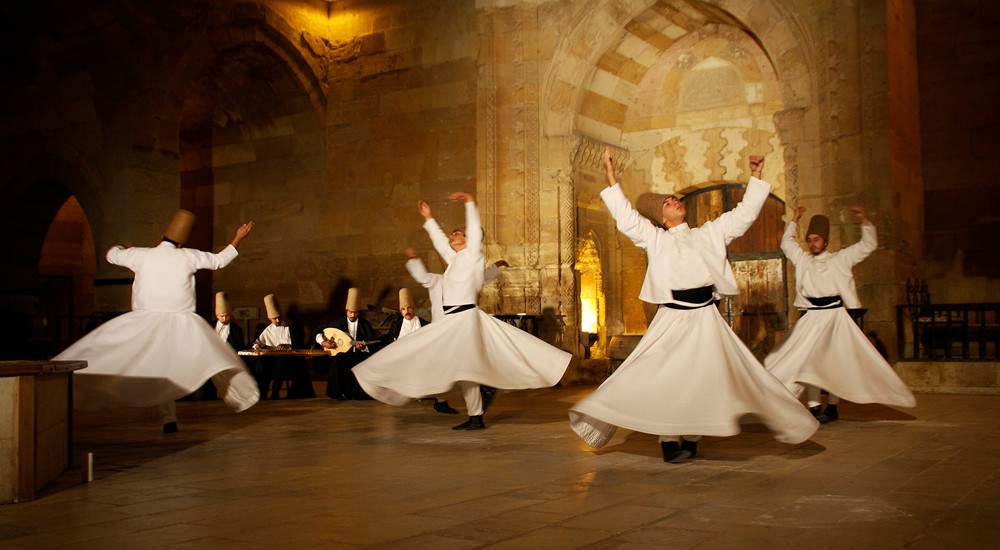